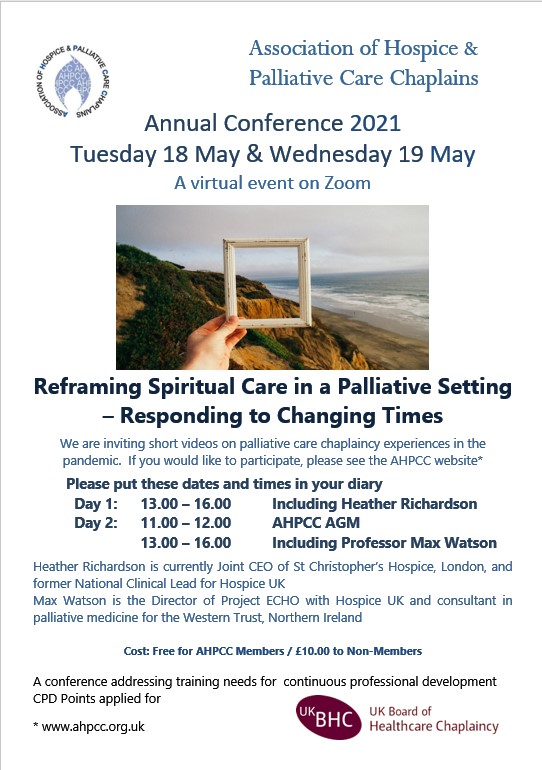 The 2020 Conference was cancelled soon after the first Covid Lockdown was imposed. We were at least able to hold the AGM, at relatively short notice, via Zoom.

2019 – The Emerging Shape of Palliative Care Chaplaincy - Embracing the Challenges

Revd Karen Murphy, AHPCC President
Presentation: Setting the Scene
Workshop: New Chaplains’ Workshop
“I am a Methodist Minister, ordained in 1989, and have been involved in hospice chaplaincy for sixteen years. My current role is full-time chaplain at Weston Hospicecare in Somerset. I am frequently involved with training and supervision as well as developing a team of volunteers to be companions to patients and families, encouraging people to look at their networks of support and care. Outside of work my interests include working an allotment, running and creating woolly things from crochet.”
Karen’s introductory presentation, ‘Setting the Scene’ opened the Conference with a discussion of the conference theme. She also led the ‘New Chaplains’ Workshop’.

Dr Conor Carville, Associate Professor, Department of English, University of Reading
Presentation: ‘Samuel Beckett: Writing and the history of care’
Workshop: Care and Creativity – engaging with care and death in writing
Conor Carville is Associate Professor of English at Reading University. His book on Irish cultural theory The Ends of Ireland: Criticism, History, Subjectivity, appeared in 2012.   Samuel Beckett and the Visual was published by Cambridge University Press in March 2018. Other recent publications include essays on Beckett’s early poetry, and on his novels Watt and Murphy. His book of poems Harm’s Way was published by Daedalus Press in 2011, a new collection, English Martyrs is forthcoming in September.
Conor’s presentation was based on his work on Beckett, and his workshop explored further how writers have engaged with the question of care and the experience of death, with a view to enabling workshop participants to produce their own short creative pieces.
Dying Well: Becket, writing, and the history of care

Revd Dr Chris Swift, Director, Methodist Homes Association and former President of the CHCC
Presentation: Practical Issues for Chaplaincy moving forward
Workshop: On practical issues for Chaplaincy moving forward
Chris is a director at Methodist Homes (MHA), providing leadership for the organisation’s 140 chaplains and developing the work of spiritual care for those in later life. As an Anglican Priest for over 25 years Chris spent twenty years working in the NHS, most recently as Head of Chaplaincy in the Leeds Teaching Hospitals. In 2005 Chris completed a PhD in contemporary health care chaplaincy and continues to teach on MA courses; conduct research; advise on PhD projects and write for publication. Chris served two terms as president of the College of Health Care Chaplain (2004-7) and was seconded to lead a project developing new national chaplaincy guidelines for NHS England in 2015. He is author of Hospital Chaplaincy in the Twenty-first Century (2014) published by Routledge. In 2019 Chris was awarded a Visiting Professorship at Staffordshire University in pastoral, religious and spiritual care.
Practical issues for chaplaincy moving forward

Keith Munnings, Conference Chaplain
Workshop: Supporting patients with meditation
Keith Munnings started as a Chaplaincy Volunteer in 2005 working as an Honorary Buddhist Chaplain for an Acute Trust in the Midlands. He now works in a paid role for a similar Trust in the North West with a specific role of developing a Mindfulness Meditation Service Provision, providing wellbeing support for both staff and patients. Keith has represented Buddhism on the national multi-faith council, chairing the group for three years, and he has also been very involved with introductory chaplaincy educational courses funded by NHSE, such as ‘Starting Out in Healthcare Chaplaincy’.

Jo Sims, Head of Family Support at Rainbows Children’s Hospice, Loughborough
Workshop: A model for paediatric Spiritual Care
Jo Sims RGN, RSCN, MA, is Head of Family Support and Outreach at Rainbows Hospice for Children and Young People.
“I am a Registered Adult Nurse and a Registered Sick Children’s Nurse. I have worked in Paediatric Palliative Care for in excess of twenty years. I am currently a Senior Nurse at Rainbows Hospice for Children and Young People in Leicestershire. I lead a Multi-disciplinary team offering holistic support and outreach to families that include a child with a life-limited condition I have a Masters in Hospice Leadership.”

2018 – Resilience and Reflection in Chaplaincy and Spiritual 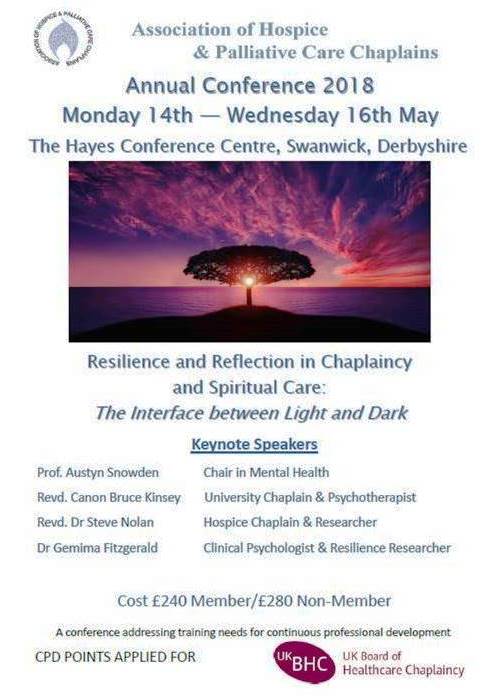 Workshops
Description of the workshop
Keith Morrison Blether – Where listening to each other really matters
Gemima Fitzgerald Building resilience
Catherine Murphy Clowning: ‘fooling around’ or making sense of ourselves
Lynn Bassett Exploring the Notion of Silence as Care
Steve Nolan From Supervision to Case Study: how to write a Chaplain case study
Austyn Snowden Measuring the Impact of Chaplaincy in Healthcare
David Buck Meditation using music and poetry
Karen Murphy New chaplains’ workshop
Bruce Kinsey Nurturing our Journey, Engaging with our Shadow

2017 – The Challenge of Diversity: faith and belief in palliative care 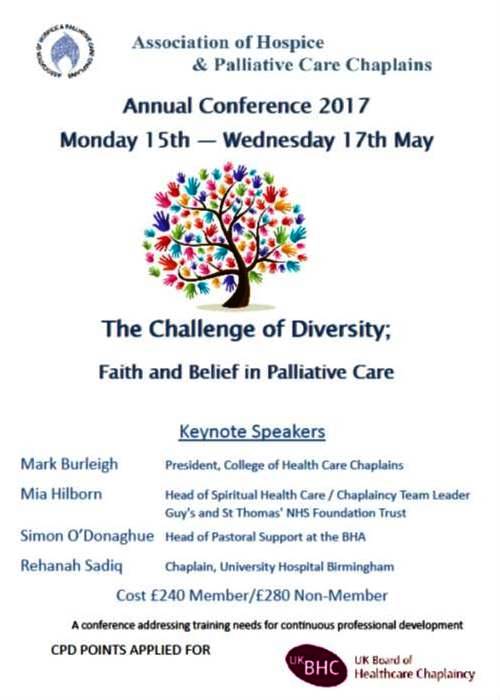 2016 – A Touching Place – the power in palliative care 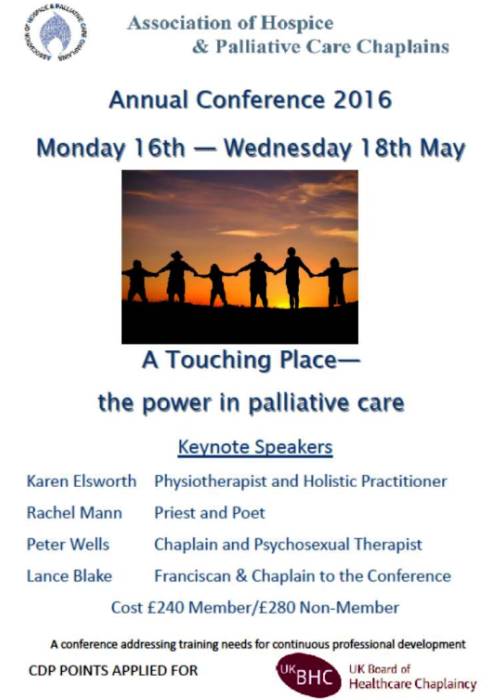 2015 – ‘Suffering and Wellbeing’ seeking a balance in palliative care 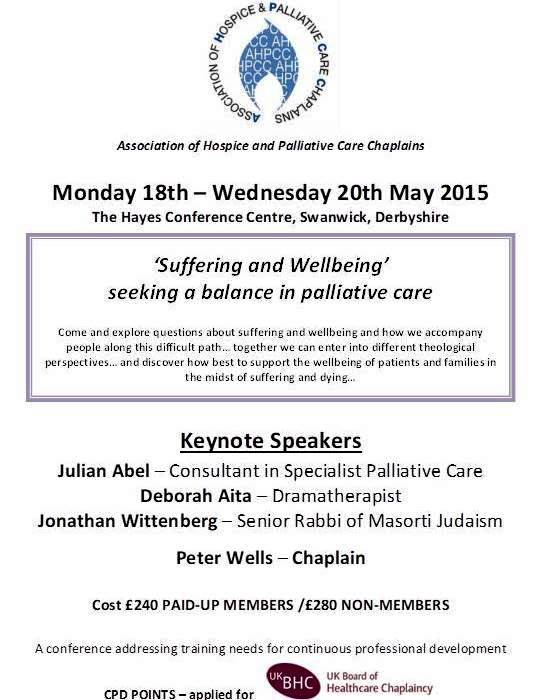 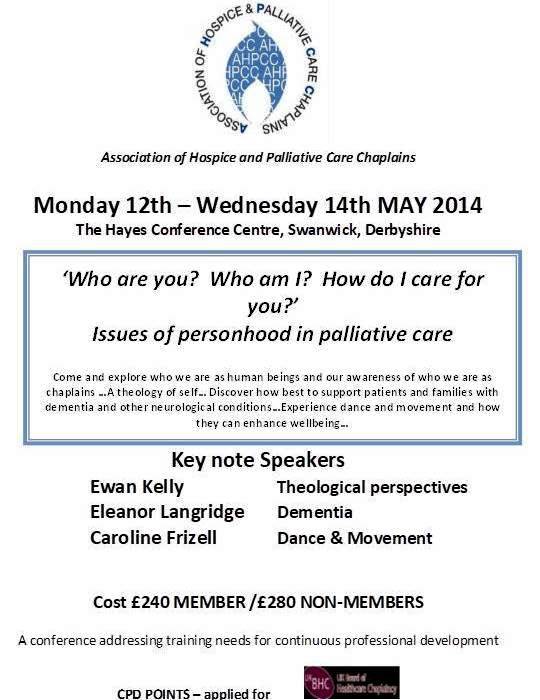 Keynote Speakers
Ewan Kelly Developing a theology of self in the provision of spiritual care
Ewan Kelly Hospice and Palliative Care: whose need is being met?
Eleanor Langridge I’m still me! A dementia diagnosis doesn’t change who I am
Caroline Frizell: Dance as a Healing Art: moving closer to heart and soul 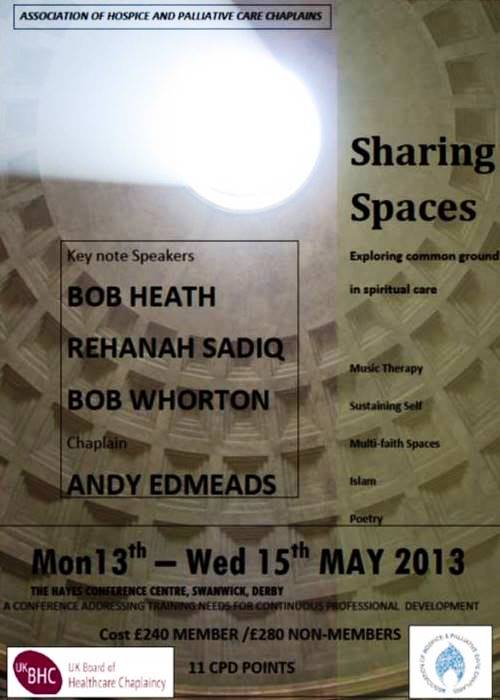 2012 – Creative Connections… the heart, mind and soul of spiritual care 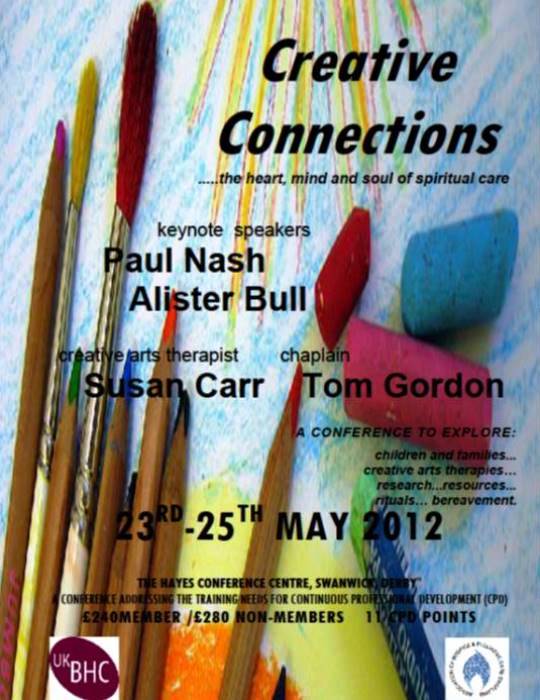 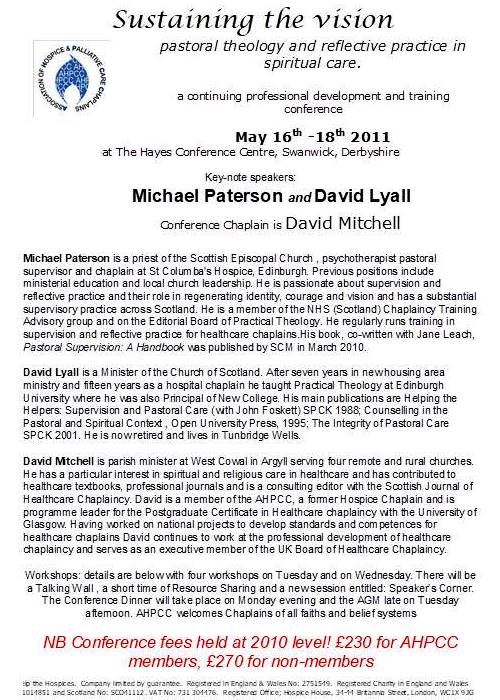